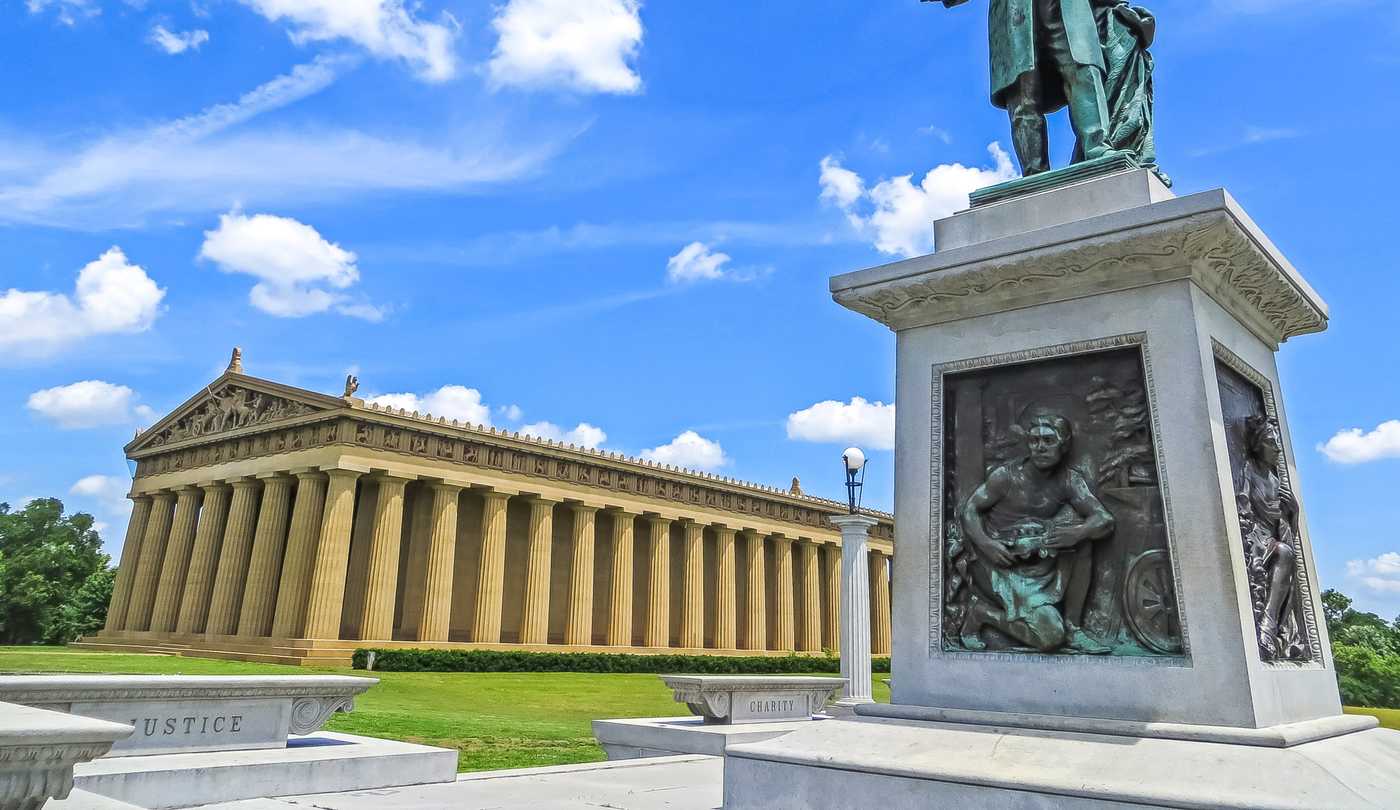 During your free time, it’s important to have access to plenty of fun activities – whether that’s fitness, art, music, or whatever you enjoy. Located in Midtown, Centennial Park is one of Nashville’s premier parks and destination.

Centennial Park boasts 132-acres of recreational activities for locals and visitors alike. Here you’ll find Nashville’s iconic Parthenon, a peaceful 1-mile walking trail, gardens, a dog park, and so much more. Sunbathe or play sand volleyball in the summer or head indoors to the Centennial Sportsplex or Centennial Art Center. Whatever your hobbies or interests, Centennial Park has something for everyone and it’s conveniently located in Midtown Nashville. Let’s take a look at some of the park’s many features – but first, a bit of history.

A Brief History of Centennial Park

The grounds of beautiful Centennial Park were the site of the 1897 Tennessee Centennial Exposition, which included the construction of the replica Parthenon which started in 1895. The first community center in the park opened in 1916 which had a trolley and a playground for the children. Since then, over the years, the park has added a steam locomotive, fighter plane, sunken garden, Lake Watauga, a swimming pool and art center. And that’s not even getting into the details!

Get Active at the Centennial Sportsplex

Love staying active? You have everything you need at the Centennial Sportsplex to get that heart rate up and have fun doing it. The complex allows guests to work out, swim, ice skate, play tennis, and host events. They even offer memberships for less than your typical gym membership.

The aquatics center boasts a lap pool for competitive swimming, water aerobics, Red Cross classes, and free swim. Head to the fitness center where you’ll find the latest gym equipment, free weights, and indoor track – you can also sign yourself up for a few personal training sessions. If ice skating is what you’re into, the ice skating rick offers youth and adult hockey leagues and open public skating sessions. And the tennis center has thirteen outdoor hard courts, including one 2500-seat stadium court, the Ruthelia Buchi Indoor Tennis Center with four hard courts, and eight outdoor permanent courts for ages 8 and under.

A visit to Centennial Park isn’t complete without a moment of admiration for the replica Parthenon which stands as the centerpiece of this urban oasis. Just as it was in ancient Greece, there is also a 42-foot statue of Athena which is the focus of the Parthenon. Both the building and Athena are full-scale replicas of the original.

As mentioned earlier, the monument was first built for the 1897 Centennial Exposition and the “plaster replicas of the Parthenon Marbles found in the Naos are direct casts of the original sculptures, which adorned the pediments of the Athenian Parthenon dating back to 438 B.C,” says the official parks and recreation website.

Now, the Parthenon serves as both a fixture of the park as well as Nashville’s art museum. The museum features a permanent collection of 19th and 20th-century American artists. There is also additional gallery space that hosts rotating exhibits and temporary shows.

Show Your Creative Side at the Centennial Art Center

Transformed from a swimming center to an art center in 1971, the Centennial Art Center provides art and cultural experiences for people of all ages. Free and open to the public, the welcoming facility teaches visual arts classes and hosts an art gallery with six gallery shows annually.

Inside the art center, you can sign up for a variety of art classes taught by professional and highly-skilled instructors. Some of the most popular classes are drawing, pottery, painting, and sculpture. The classes are typically offered in three different sessions – Summer, Fall, and Winter/Spring.

The art gallery at the Centennial Art Center is completely free and showcases local, regional, and emerging artists. Refreshments are served during exhibit openings and you can meet the artists themselves. Be sure to check the calendar for upcoming exhibits.

The Centennial Park Conservancy is Keeping the Park Thriving

The Centennial Park Conservancy has organized with the Metro Parks and Recreation Department to help preserve, enhance and share the Parthenon and Centennial Park. They are a non-profit organization that helps fund many of the programs and events that take place within the park and the Parthenon.

The funding from the Centennial Park Conservancy helps a wide variety of programs that include Musician’s Corner (events which feature emerging and established artists with an annual attendance of 75,000 people), Kidsville (which connects kids to free opportunities that enhance their education and life experiences), art exhibits, lectures, and more.

Admire the “If Trees Could Sing” Project

Metro Parks and The Nature Conservancy started a new initiative call “If Trees Could Sing”. The project includes 18 videos featuring well-known Nashville musicians talking (and even singing) about the beauty and importance of trees. Throughout Centennial Park, you’ll find signs near trees with QR codes. By scanning the QR code or going to the web address, guests can view the incredible videos. The purpose of the initiative is to encourage visitors of the park to get closer and more interactive with the trees all around them. Artists who participated in this program include Reba McEntire, Ben Folds, Amy Grant, Taylor Hicks, Kathy Mattea, and more.

As it’s easy to see, Centennial Park is so much more than just a park. It’s a place for daily exercise, entertainment, history, and preservation. Centennial Park (and other options of endless fun!) just around the corner, what more do you really need?