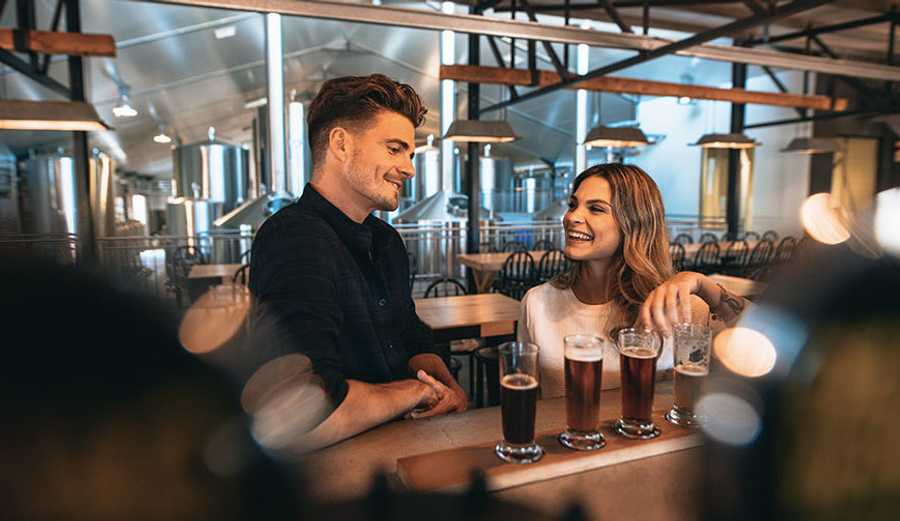 If you’re an ale-quaffing, porter-tasting, red-guzzling, lager-slugging, red-blooded American (recently transplanted or otherwise), then you’re lucky to be hanging your hat in Cincinnati.
Cincinnati has an old tradition of beer crafters. Even back in the 1870s, Cincinnati had over 40 breweries! But why all the breweries at that time, when Cincinnati was far from the sprawling metropolis it is today?
Simple.
The original settlers where predominantly German – which is really all the explanation you need.
Here are 9 can’t-miss breweries in Cincinnati.

1. Urban Artifact
A local craft brewery with a historical twist, Urban Artifact is housed beneath St. Patrick’s Catholic Church. Under the awesome, classical architecture, the Urban Artifact hosts live music almost every night, and pours their delectable craft brews into grateful cups.
They specialize in interesting and original brews like Love Letter, a Midwest fruit tart and The Gadget, a sour berry bomb. My favorite beer was definitely the Owler, a tart vanilla brown with a punchy start and a smooth backend.

2. The Woodburn
With a recently restored taproom and a veritable bouquet of alluring craft beers, the Woodburn is a spot any beer-lover is going to want to hit while they’re in Cincinnati.
If you belly up to the bar and stare wide-eyed at the selection, paralyzed by beer-fever, it may be smart to check out a few of their flights, especially if you’ve got a few friends with you.
Though almost all of the beers here are amazing, I recommend the simplicity of the Breakfast Porter. Flavorful, full, but less filling than many porters I’ve tried.

3. Bad Tom Smith Brewery
The creak of leather, the dull smack of a hand against a grip, the metallic clack of a hammer being drawn back. A man in the street, an iron in his hand – they call him Bad Tom Smith.
Bad Tom lived a life of infamy in the old west, and now he’s got a brewery named after him. Crime does pay – I mean, not for him (he was hanged in 1895) – but for the lucky folks who wander into the Bad Tom Smith Brewery.
With a western flare and beer fit for any gunslinger – along with a stand-alone bar that allows you to actually sit across from your friends and fellow visitors, the Bad Tom Smith Brewery will make any cowpoke enthusiast feel comfortable. Never mind the free peanuts and popcorn on the bar, which is a touch I appreciated, the beers themselves are damn fine!
Though Bad Tom offers plenty of beer styles, you absolutely must grab a taste (and maybe a pint) of one of their big three, the backbone of their catalog. Those would be the Bad Tom Brown, smooth and tasty, the Breathitt County Blonde, light and sharp, and my personal favorite, the Fink Red Rye with its hoppy bite and rich texture.
So, saunter on down to Bad Tom’s, push through the batwing doors (there aren’t batwing doors, but you can pretend there are), and belly up to the bar.

4. Rhinegeist
Literally meaning “ghost of the Rhine river,” Rhinegeist celebrates Cincinnati’s original German population, the folks behind the glut of breweries and craft beers we still enjoy today.
Rhinegeist is located in the massive former bottling plant of the Christian Moerlein Brewing company, which was the largest brewery in the city in the 1890s. Continuing a tradition of greatness, Rhinegeist brews truly excellent and unique beer in this historic location.
My personal favorites are Truth, a dry IPA with the barest hint of citrus, and Cougar, a light blonde ale that doesn’t overstay its welcome on your pallet.
Rhinegeist also throws a trivia night every Wednesday. I’ve always found drinking and brain teasers to be a hilarious combination. They also have free Yoga nights most Sundays, and make frequent use of the huge facilities by hosting more wild events like Jousting. In Jousting, two patrons put on pads, get in the middle of an inflatable ring, and whack each other with double-ended padded staves, trying to knock the other off their pedestal.
Like I said, this is a brewery you absolutely cannot miss.

5. MadTree Brewing
Catch a tour of this local craft brewery, which not only slings delicious beer but also has snacks and a pizza place inside the brewery called “Catch a Fire Pizza.”
A hedonist’s heaven, MadTree Brewing is a one-stop shop for pizza, beer, laughs, and friends. They also frequently host food trucks outside the taproom, giving you options if you’re tired of pizza. But let’s get real, who gets tired of pizza?
For their core beers, I personally recommend the Happy Amber, a caramelly ale with a smooth, round flavor, or the PSA (Proper Session Ale), which mixes the bitterness common to IPAs with some fruity aromas. They have seasonal beers, too, but that’s going to depend on your mood – for winter, I found Thundersnow, a mix of ginger, vanilla, and cinnamon, to be a perfect Christmas-time treat.

6. Listermann Brewing Co
This hip, family-owned brewery has been pouring brews for 10 years and shows no sign of slowing down.
With award-winning beers like their Nutcase Peanut Butter Porter and their Chickow! Double-brown, the Listermann Brewing Co won’t let you down. The brewers have a great sense of humor, too, with cheeky beer names like “Call to Farms,” “I’m On a Boat,” and “99 Problems.”
One of the cool things about the Listerman Brewing Co is that they have what they call a “Fermatorium” where they make wines and cider. They even do “Wine Wednesdays” with $11 bottles of wine all day long.
The taproom is spacious, clean, and a great place to hang out with wine lovers and beer lovers alike.

7. Fifty West Brewery
So, there have been a lot of great breweries on this list, and I happily recommend any one of them.
However, Fifty West Brewery is a little different than those others. How so?
Sure, it’s got fantastic beer (especially the Autostrada IPA), and a wonderful environment for friend hangs or dates. True.
What separates Fifty West from the pack, though, are the outdoor sports. Oh, you didn’t mishear. Do you like volleyball? Fifty West has 6 volleyball courts just outside the brewery, and even hosts volleyball leagues through most of the week!
How about cycling? Since Fifty West is right next to the Miami Scenic River Trail, it makes a great jumping-off point or after-trail hangout for any group of serious or recreational bikers.
Fifty West Brewery is also right next door to Fifty West Canoe and Kayak (appropriately), meaning you can spend a day on the water working out your forearms and your shoulders and then head into the brewery to work on your 12-ounce curls.

8. Christian Moerlein Lager House
Not only does the Moerlein Lager House offer world-class microbrews, but it also serves artisan meats and breads for some of the most delicious, hand-carved sandwiches in the city.
Seated just on the riverfront, the Moerlein Lager House celebrates the German heritage of the original settlers of the city. Grab a 22 oz. of their Emancipator Doppelbock for a short trip through history: it’s been brewed to the exacting specifications of the Reinheitsgebot Purity Law, which was created in Germany in 1516 to ensure maximum quality, flavor, and authenticity.
If you’re a trivia lover, swing by every Tuesday for Qs, As, and brews with friends and friendly strangers all competing for who’s got the biggest brains.

9. 13 Below Brewery
Another brewery situated right on a gorgeous view of the river, 13 Below slings beers and food in the family-friendly brewery.
If we’re talking beer, I can’t recommend the River Castle enough. It’s a light but flavorful brew made with California Ale Yeast and Noble hops. I also wouldn’t pass up the Lock & Dam, a sharp Scotch Ale with malt flavors and a pretty significant alcohol content that’s not for the timid.
The space itself is comfortable and relaxing, with a mid-sized taproom installed with TVs to keep an eye on the game. Outside, there’s a lovely little beer garden where you can sit at picnic tables in the grass or hang out in the gazebo. You can even play cornhole while you taste beers and take in the breeze. It’s hard to think of a better way to spend a lovely summer evening.
History, Heritage, and Hops at Cincinnati’s Famous Breweries
No matter your preference, whether you’re an IPA maniac or a porter champion, there are a glut of Cincinnati breweries that will wet your whistle and provide a night of fun for you and your loved ones. With activities like trivia nights, tours, tastings, hiking, biking, and kayaking, there’s a brewery for everyone from homebodies to fitness fanatics.
And don’t let all the beer turn you away – most of the breweries offer food, non-alcoholic beverages, and stimulating mental and physical activities. Many of them even outright label themselves as family-friendly out of the gate, making them a perfect spot for a Sunday with the fam.