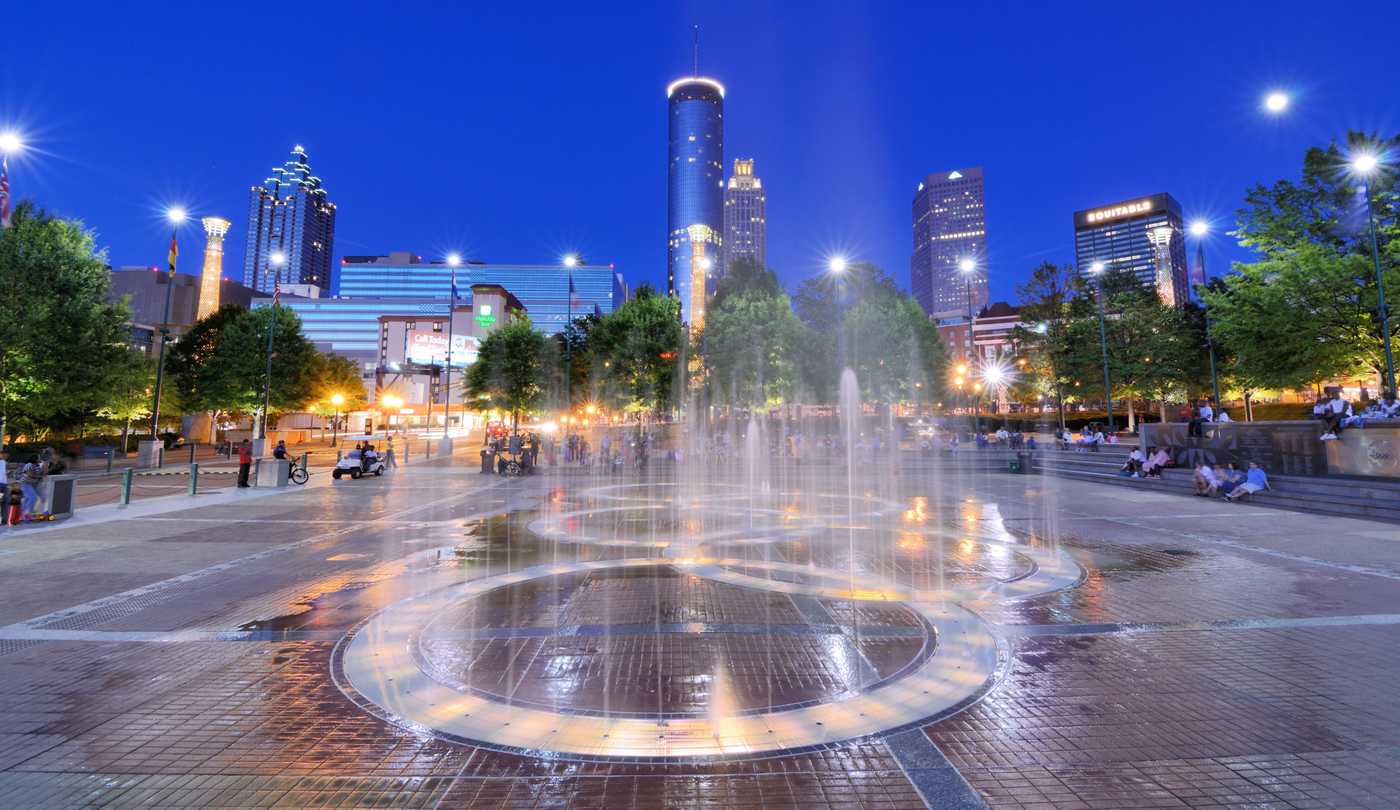 At 1660 Peachtree, you’re just a short drive away from the best of downtown Atlanta, where you can enjoy family-friendly attractions during the day and then hit up the nightlife when the sun goes down. Visit museums, restaurants, parks, and more. You’ll never have a boring weekend again!

Most notably, just 15 minutes away from our luxury Peachtree apartments is the Centennial Park District in the heart of Atlanta. Developed as part of infrastructure improvements in 1996, this area has blossomed into a central hub of the city, where culture, nightlife, and learning meet.

This 21-acre public park acts as the center of the Centennial Park District and celebrates Atlanta’s Olympic past with statues, water features, and landscaping that celebrate Atlanta’s role in the 1996 Olympic games.

This is a great place to bring the kids on a hot summer’s day if not for the Fountain of Rings where kids can play in the water jets, just like running through a sprinkler with all your friends! Come to one of the many city-wide events that are hosted here, including Wednesday WindDown, a popular music concert series, and the annual Independence Day concert and fireworks display. You’ll find yourself coming back often, because there’s always so much to do and see!

Throughout the park, there are engraved bricks that tell stories, speak to loved ones, and add a personal touch to the park. Spend some time reading these, and feel how special of a place this is for the people of Atlanta.

Center for Civil and Human Rights

Get a dose of education at the Center for Civil and Human Rights, right in the Centennial Park District. This museum is dedicated to the achievements of the civil rights movement both in America and on the global stage. Their website lauds “a visceral experience of sights, sounds, and interactive displays depicting the courageous struggles of individuals working to transform the United States from Jim Crow laws to equal rights for all.”

The Children’s Museum of Atlanta

For parents with young kids living at our Peachtree apartments, the Children’s Museum of Atlanta presents itself as the perfect weekend activity for young minds. Founded in 1988, this hands-on museum is sure to capture your children’s imaginations.

For children 10 months to 8 years of age, there’s the “Tools for Solutions” section, where kids can learn about physics by moving balls through a giant ball machine, where they can build with real tools and materials in the Build-It Lab, and where they can get hands-on construction experience with pipes and wires in the Construction House. They can even build their dream cities of the future!

Give your kids a dose of geography here at the “Gateway to the World” Exhibit, where they can travel the world without ever leaving Atlanta. Kids can learn about the layers of earth’s crust by climbing through each layer in an interactive, immersive learning experience. This is also a great place where kids can learn about all six continents on the museum’s interactive continent tables, and they can even design and build their own working rockets!

The museum also features an exploration zone for babies and toddlers, where they can hone easy science skills by fishing with magnetic fish, learning about the properties of water, and discovering why some things sink and why others float.

Tour Where Your News is Made Every Day at CNN Center

Have you ever wondered what it would be like to work at your favorite network news channel? CNN headquarters are in the Centennial Park District of Atlanta, and you can tour behind the scenes at CNN! Guided tours show visitors how the news is gathered, let them in on fun production secrets, and give them a glimpse of how and where the news is made. This is perfect for budding journalists who might be interested in a career in journalism!

Got a college football fan in your party? Swing by the College Football Hall of Fame! This is no ordinary Hall of Fame. They pride themselves on being “More than just a museum”. Instead, it’s an interactive experience complete with an indoor playing field, a game day theater, and stories about how football legends became the amazing athletes we know and love today.

Spend an entire day here, and then go hit up the craft beers and fine restaurants around Centennial park!

Good Eats All Around the Park

If you work up an appetite at all the attractions, you’re in luck! The Centennial Park District has some of the best dining in Atlanta. If you’re looking for light Americana fare, check out the Cloakroom Kitchen and Bar which serves up craft cocktails and is only a short walk to the Mercedez-Benz Stadium and State Farm Arena. It’s the perfect place to grab some drinks and appetizers before a game.

Looking for a swanky rooftop bar? Look no further than the Skylounge at the Glenn Hotel. You’ll feel like a million bucks as you enjoy some craft cocktails and fine dining while looking across the beautiful cityscape of Atlanta. (Take a date here, they’ll love it!)

If you’re looking for a great place to watch the game (with some good food and craft beer to boot), look no further than STATS Brewpub. They pride themselves as “Atlanta’s Ultimate Sports Bar”, and there’s no wonder. Their website proudly declares they have “More than 70 HD televisions, gourmet American cuisine and house-brewed beer that literally pours from the tables.”

This is just the tip of the iceberg! Check out the Centennial Park District website to get the full scoop on good eats and drinks while you’re out and about.

Luxury Living Close to the Heart and Soul of Atlanta

Atlanta’s Centennial District is the perfect place to spend a day with the kids or to go out for a swanky date night on the town. And the best part? It’s not far from luxury living at 1660 Peachtree. When you live at 1660 Peachtree, you’re deciding on a premium living experience just steps away from the center of Atlanta, in a fashionable, and laid-back neighborhood. Schedule your tour of our beautiful Peachtree apartments today!