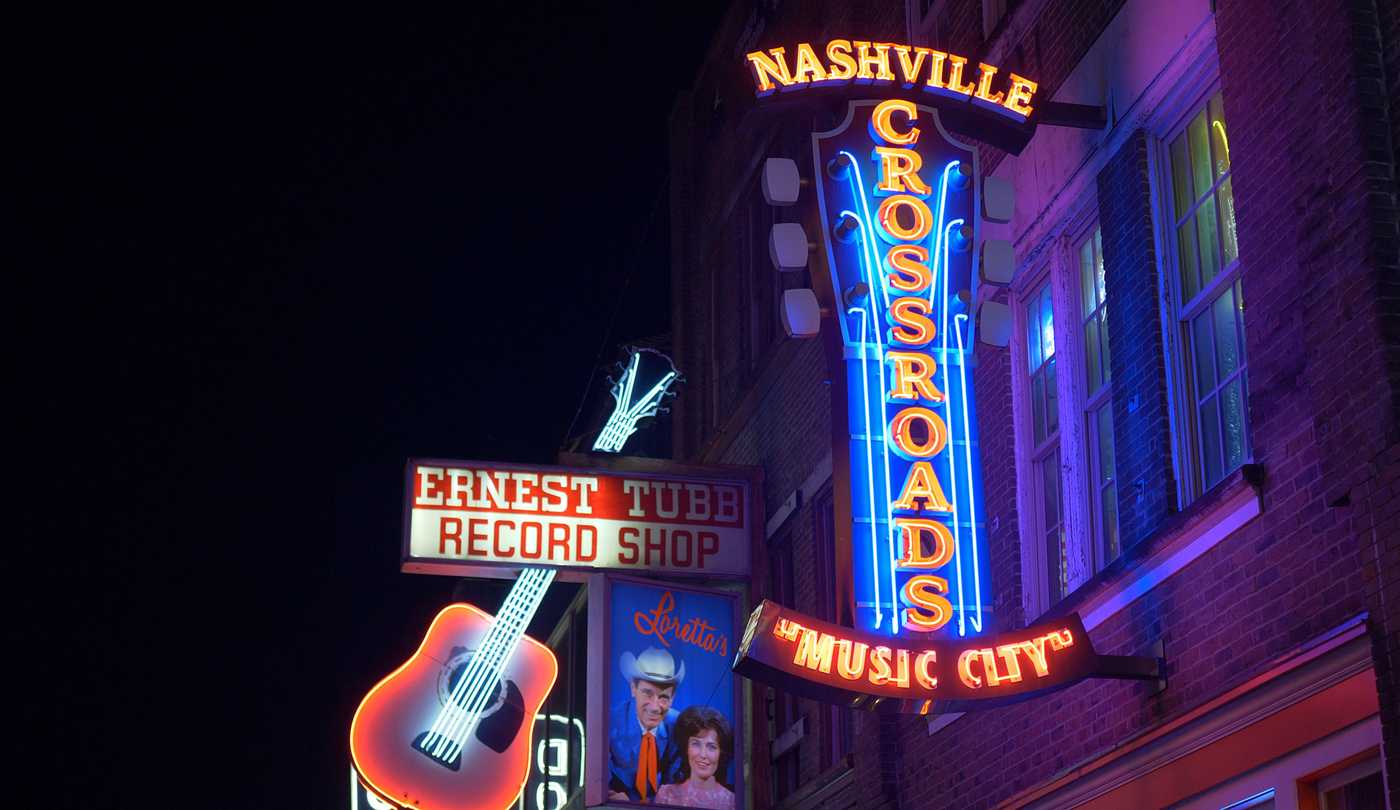 Nashville is known as Music City, USA for a reason. As a city nestled in the hill country of Tennessee, who knew that this would be the place to lay down serious roots for country, rock, and the blues? On any given day in America’s music city, locals can enjoy the best live music around, and maybe even become musicians themselves.

We’re never far away from big music legends and rising stars who take local stages every night, and who foster a community of arts right here in Nashville. So if you love tapping your feet to some live jams, then this is the city for you.

A Brief History of Music in Nashville

You may be wondering how Nashville became the music mecca that it is today. From the very beginning, major players in Nashville have been renowned for their musical talent and buck dancing. “Nashville’s earliest settlers celebrated in the late 1700s with fiddle tunes and buck dancing after safely disembarking on the shores of the Cumberland River.” according to VisitMusicCity.com. “Nashville’s first ‘celebrity,’ the noted frontiersman and Congressman Davy Crockett was known far and wide for his colorful stories and fiddle playing.”

In the 1800s, Nashville became world-famous for music publishing, with its reputation making it all the way to the queen of England, who specifically demanded that the first around-the-world touring musicians should no-doubt be from America’s “Music City.” And this was even before radio broadcasts and vinyl records!

In 1892, Nashville would further establish itself as America’s Music City when the most famous Nashville music venue was built: the Ryman Auditorium. As the largest auditorium south of the Ohio River at the time, the Ryman Auditorium was where some of America’s most beloved musicians took the stage, including the likes of Marian Anderson, Nat King Cole, and Louis Armstrong.

Musical history is everywhere in Nashville and it’s all at your finger-tips at our Midtown Nashville apartments.

The history of music in Nashville is palpable everywhere you go, but no place more so than The Grand Ole Opry. With the dawn of radio station WSM in 1925, a new era of country music was born. Hundreds of iconic musicians would forge a name for themselves on the stage of Ryman Auditorium in a weekly 1-hour radio broadcast that would be known as The Grand Ole Opry. The show was led by George D. Hay and was originally advertised as a 1-hour “barn dance,” however the show would quickly grow to be an iconic symbol of Nashville.

According to VisitMusicCity.com, “The establishment of radio station WSM and its launch of the broadcast that would be called the Grand Ole Opry further secured Nashville’s reputation as a musical center and sparked its durable nickname of Music City. Still staged every week, The Opry is America’s longest-running radio show, in continuous production for more than 90 years. It ignited the careers of hundreds of country stars and lit the fuse for Nashville to explode into a geographic center for touring and recording.”

Hundreds of musicians have made a name for themselves through The Grand Ole Opry. The iconic radio show has helped launch the careers of famous artists such as Flatt and Scruggs, Bruce Springsteen, Dolly Parton, Garth Brooks, Jack White, James Brown, The Foo Fighters, Aretha Franklin, Paul Simon, Neil Diamond, Diana Ross, and many more.

The Opry is still creating stars to this day. See Music City’s up and coming artists before they hit the big time, as well as some Nashville legends.

Music Row in Nashville: The Heart of American Music

Just a 7-minute drive from our Midtown Nashville apartments is one of the most important bedrocks of American music: Music Row. Home to iconic record label offices, radio stations, and recording studios, Music Row is the center of Nashville’s country music industry.

If you walk down the street in Music Row, you’re sure to recognize many of the record labels who set up shop here. Music Row is home to Big Yellow Dog Records, who represents Meghan Trainor and Maren Morris, among others. A couple of doors down is Big Machine Label Group, representing the likes of Midland, Thomas Rhett, Taylor Swift, Sugarland, Sheryl Crow, Ronnie Dunn, Reba, Rascal Flatts, Lady Antebellum, and more. Talk about a star-studded roster. Down the way a bit is Ocean Way Records, who prides itself as one of the world’s finest music studios, in conjunction with Nashville’s College of Entertainment and Music Business. They’ve been home for many internationally-acclaimed artists, among them Yo-Yo Ma, EmmyLou Harris, Willie Nelson, Matchbox Twenty, Luke Bryan, Carrie Underwood, Counting Crows, Tim McGraw, Toby Keith, and many more.

It’s impossible to walk down the street in Music Row and not see some kind of celebration of music, whether it’s hearing musicians jam out, seeing a band haul music gear, or watching a live show.

The Best Venues for Live Music in Nashville

No matter what kind of music strikes your fancy, you’re sure to find what you’re looking for in Nashville. Whether you’re in the mood for bluegrass, folk, country, rock, blues, or pop, there’s always a wealth of live music opportunities so grab some friends and hit the town!

First, you’ll want to check out The Bluebird Café, which is renowned for its intimate atmosphere that’s meant to help rising songwriters get used to the spotlight. The Bluebird Café encourages musicians to share the stories behind their songs and fosters a supportive environment for musicians of all stature.

The Station Inn, on the other hand, is where you’ll want to go if you’re in the mood for bluegrass! Locals say that the music here is “unbelievable” and that you’ll want to come back again and again.
We would be remiss if we did not mention The Grand Ole Opry, the most famous music venue in Nashville! Here, you can not only listen to amazing live music from up and coming stars, but you can also learn about Nashville’s rich music history while celebrating the greats in country and rock n’ roll.

There are so many other fantastic live music venues in Nashville, so be sure to explore the city to discover your next favorite place to see a live show. From the tourist spots to the backroads, Nashville is teeming with world-class musicians who are ready to put on a fabulous show.